At the beginning of May 2014, it was the 10th anniversary of the largest enlargement of the European Union, when 10, mostly former socialist states, were admitted to full membership. It was a historic day for Europe, symbolizing the end of decades of division. Among the new members was Slovenia, the first country in the region and the first country of the former Yugoslavia to join the European family. On this occasion, a group of local NGOs invited the Public Policy Institute, which was then a new but already recognized organization in Slovenia, to design, organize and produce an event to commemorate this significant jubilee.

The main objective of the event was to exchange experiences and analyze the integration context in the Western Balkan countries, with the continued support of Slovenia as an EU member state. Participants in this discussion were the most important representatives of state institutions, professional associations, civil society organizations, media, international organizations and diplomatic missions of Slovenia, Serbia and Montenegro.

The event was concluded by a panel of representatives of the civil sector and the academic community of Slovenia, whose main objective was to provide advice and guidance to the Western Balkan countries on their path to EU membership, with particular emphasis on Slovenia's role in the process.

Alenka Kosir, Head of Enlargement and Southeastern Europe at the Ministry of Foreign Affairs
"The enlargement process and Slovenia's foreign policy "

Bojko Bucar, Dean of the Faculty of Social Sciences in Ljubljana
"A Critical Look at Slovenia's Foreign Policy and EU Enlargement Procedures"

Hotel Slon is situated in the very heart of Ljubljana. It is only a few steps away from the old city core, Ljubljana castle and all the main city sights. Hotel got its name (meaning “elephant”) because of the story of Maximillian II, who was the Archduke of Austria. He was bringing an elephant called Suleiman as a wedding gift to Mary of Spain, and stopped at the best inn in Ljubljana. No one had ever seen an elephant on this side of the Mediterranean Sea, and possessing such an exotic animal was considered a sign of wealth and power. The Hotel Slon was later built on the site of this inn. The building survived for 80 years; it even survived the powerful 1895 earthquake. But, in 1937, the construction of the new Hotel Slon began, in accordance with the modern architecture fashion of the 1930s. Crowds of local people came to the construction site to observe the new hotel growing before their eyes. When completed, it was said to be the most beautiful and the most modern hotel in Ljubljana. 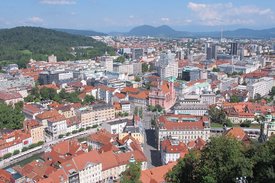 Ljubljana is the capital and largest city of Slovenia. It has been the cultural, educational, economic, political, and administrative center of independent Slovenia since 1991. Ljubljana itself was first mentioned in the first half of the 12th century. Situated at the middle of a trade route between the northern Adriatic Sea and the Danube region, it was the historical capital of Carniola, part of the Habsburg Monarchy. It was under Habsburg rule from the Middle Ages to the dissolution of the Austro-Hungarian Empire in 1918. After the World War II, Ljubljana became the capital of the Socialist Republic of Slovenia, part of the Socialist Federal Republic of Yugoslavia. It retained this status until Slovenia became independent in 1991 and Ljubljana became the capital of the newly formed state.